Don’t panic: a guide to hardware for emergency exits

In an emergency, evacuating a building needs to be as simple as possible. Once building users have found an emergency exit, it is essential that they can open doors easily so that everyone can leave safely.

Architectural ironmongery plays a large role in helping with this but getting the right types of hardware for panic and emergency exit doors is key. Here is some advice from ARRONE, the sister brand of HOPPE, about considerations when choosing the right hardware.

What is the difference between panic and emergency exit hardware?

When choosing which panic or emergency exit hardware is required, the building’s type, application, its occupation levels, and where it is in the building must all be considered.

Emergency exit hardware is mainly used in buildings where users are familiar with exit routes, such as private premises including offices and warehouses, and are not accessible to the public. Devices for these doors could be a simple push pad type device or a lever handle operating a mortice escape lock or nightlatch.

Panic hardware is used in buildings where members of the public have access to the building but may not be familiar with the exit routes, for example hotels, hospitals, stadiums and cinemas. This also applies to any building that has more than 60 people in it.

Any doors in areas that are accessible to the public must have a device fitted that is operable by a horizontal bar that covers at least 60% of the overall door width. As well as being easier to see and use from an accessibility point of view, it also adds another layer of safety functionality in the event of an emergency.

Any additional functions, such as enhanced security and accessibility, also need to be considered as this will dictate the type of device needed.

To deliver a basic level of functionality and a standard level of security, a door may only require a device with a panic latch passage function. However, If there is an additional security requirement, a panic bolt device would normally be recommended.

A panic bolt has a vertical rod to suit the door height and has locating bolts that go into the floor and the top of the door frame each time the door closes, providing three locking points in total, instead of just one with a panic latch.

There is an ongoing need for panic and emergency exit doors on commercial buildings to also be accessible from the outside. For this, an Outside Access Device (OAD) is used. It can be locked to stop manual attack of the device and preventing illegal entry to the building. 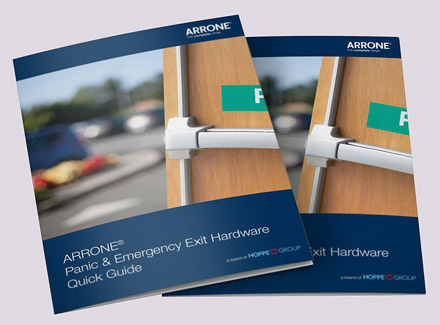 The new ARRONE lever-operated, OADs AR885L and AR886L have been launched as an addition to the AR880 series range. The devices have been included as an accessory to a device successfully tested to EN179 for emergency exit devices and BS EN 1125 for panic exit devices.

In addition to standard testing, the lever handles of the AR885L and AR886L have been individually cycle tested as an outside access device to over 30,000 cycles and torque tested to an abuse force of one kilonewton to ensure they can withstand typical levels of real-life usage.

“A common mistake we see when it comes to panic and emergency exit hardware is poor fitting,” said Jason Tonks, technical manager of ARRONE. “Not all panic and emergency exit hardware devices are the same. It is therefore critical that anyone installing this type of hardware reads the fitting instructions for each product and makes sure they are fitting the product correctly to the manufacturer instructions and guidance.

“This is potentially lifesaving hardware. Getting it wrong could result in expensive replacement work for the device and door, and it will invalidate all test evidence and certification for that product.”

ARRONE has launched a new pocket guide for specifiers and installers, summarising everything they need to know about panic and emergency exit hardware in a conveniently sized guide. It includes a simple three step product selector, a section on frequently asked questions and advice on positioning hardware on different types of doors.

To get a free copy of the pocket guide, download here or contact Andy Matthews on [email protected].