The company run by the owning family

The HOPPE Group develops, manufactures and markets door and window hardware made of aluminium, brass, polyamide and stainless steel with the focus on capturing the ambiance in every detail. 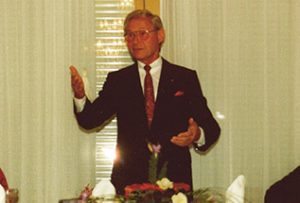 Since the mid-1970s, the company has established itself as the market leader in its segment throughout Europe, and it considers itself a leader in competency worldwide. These claims are supported not only by its market share but also by its comprehensive product range, its innovative capability, the optimum benefit/price ratio it offers and its technological leadership in the aluminium segment.

Founded by Friedrich Hoppe in 1952, HOPPE has developed into a globally active group based in Switzerland.

This family-run company is led and shaped in the second generation by the two members of the owning family, Messrs. Wolf and Christoph Hoppe, who can afford and are willing to think and act on a long-term basis thereby investing in a continually better future instead of pursuing only short-term success. 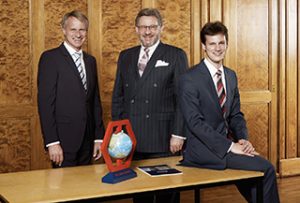 The entrepreneurs (from l. to r.): Christoph Hoppe,
Wolf Hoppe and Christian Hoppe

They have made sustainability a priority in the way the business is conducted, not just financially but in social and ecological matters also.

The course for continuity of HOPPE as a family-run company even in the third generation was set when Christian Hoppe, the eldest son of Wolf Hoppe, joined the company in April 2012.

This long-term “thinking in terms of generations” also enables the implementation of a company leadership based on values such as trust, responsibility, understanding, credibility, honesty, loyalty, integrity and decency. With this basis for leadership, the recognition that “Whoever demands good performance must offer a sense of purpose” can be put into practice.

The company aims to create an honest and healthy working environment, which promotes innovation, where beneficial performance brings success which in turn gives pleasure.

This positive “quality of interaction” is not just an empty phrase but is put into practice (and demonstrated by example).

The right employees will increasingly be the decisive competitive “factor” in the future. With the creative development of their potential, customer-oriented added value and long-term profit optimisation, these employees will continuously increase the company‘s survivability in comparison with its competitors.

Within the framework of the Company Beliefs and Aims, jobs at HOPPE are self-made adventure playgrounds for mature adults.